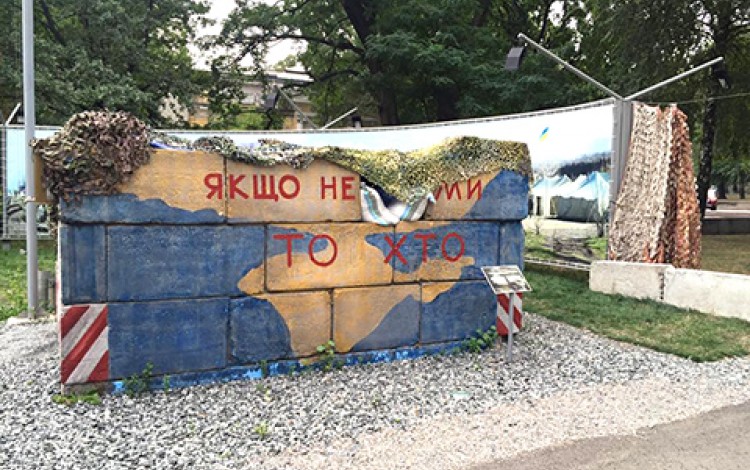 A recreated Ukrainian checkpoint bearing a depiction of Crimea stands at the entrance of Ukraine's first ATO museum in Dnipro: "This war began with Crimea and it will end with Crimea," say the museum's curators
Business Ukraine magazine

For the past three years, wounded Ukrainian soldiers have arrived in Dnipro on an almost daily basis. The sirens of ambulances - sometimes travelling in convoy - have become the macabre background music to a city at the heart of Ukraine’s war.

Dnipro has provided more troops – and suffered greater losses – than any other Ukrainian region. All over town, an abundance of Ukrainian flags and other makeshift patriotic symbolism stands as testament to widespread public support for the country’s defenders. Meanwhile, just beyond the city limits lies the final resting place for many of the unidentified soldiers killed in the hybrid war unleashed by Russia in spring 2014.

The three-year-old conflict has transformed Dnipro and turned a place that previously leaned towards Ukraine’s pro-Russian political forces into a bastion of Ukrainian unity and independence. This transformation makes Dnipro an entirely logical site for Ukraine’s first museum dedicated to the conflict.

Memorial to an ongoing war

Open to the public since early 2017, the country’s first ATO Museum is located in downtown Dnipro, next door to the city’s municipal history museum. The idea to create a museum was a joint initiative from conflict veterans and the regional administration. As with everything connected to Ukraine’s war effort, volunteers also played a major part in bringing the concept to fruition.

The “ATO” in the museum’s name refers to the acronym “Anti-Terrorist Operation”, adopted by the Ukrainian government in early 2014 to denote the ongoing fighting in the eastern borderlands of the country. The complex sits within the grounds of the city’s existing WWII museum, and includes both outdoor installations and indoor exhibits spread over a number of viewing halls.

The first thing visitors to the ATO Museum encounter is a makeshift checkpoint standing just off the pavement and marking the start of the open-air expositions. The checkpoint features a mural depicting a map of the Crimean peninsula in Ukraine’s blue-and-yellow colors. “We felt it was important to place this element at the entrance because the war began with Crimea and it will end with Crimea,” offers Yuriy Fanygin, an activist and local historian who was one of the driving forces behind the creation of the complex.

The outdoor installations are arrayed on either side of a walkway that represents the line of contact in the Donbas. On one side stand exhibits recalling the chaotic early days of the country’s war effort and the liberation of numerous Ukrainian cities in summer 2014. Bullet-riddled place names remind visitors of previously anonymous Donbas towns that briefly became household words as fighting flared across the region.

On the other side of the path, charred and twisted metal represents the devastation inside the war zone itself. Grad rocket shells protrude from the wreckage of a burned out civilian car and litter the ground. “Those rockets are Putin’s preferred weapon of terror,” says Mr. Fanygin, before reeling off the names of numerous east Ukrainian towns subjected to indiscriminate Russian Grad rocket attacks. “The idea is to paralyze ordinary people with terror and keep them in a psychological state of slavery.”

Battle for the Dnipro

The bulk of the museum’s exhibits are located inside the adjacent WWII memorial complex. Mr. Fanygin says the people behind the ATO Museum initiative saw no need to add anything to the existing Soviet-era sign at the complex entrance, which reads simply, “Battle for the Dnipro”. “We decided this was also entirely appropriate for today’s war. In 2014, we knew Dnipro was the bastion of Ukrainian statehood. If Dnipro stood, Ukraine would survive. It was our own Battle for the Dnipro.”

The first exhibition hall is crammed with relics from the conflict. It includes a range of stands honoring individual battalions, the local volunteers who provided essential supplies to the army, and the Dnipro doctors charged with saving lives in what were often impossibly inadequate medical conditions. One corner features accounts from those displaced by the fighting. Nearby, there is an entire wall decorated with enlarged versions of authentic SMS messages sent during the height of the conflict. The idea behind these text messages is to capture the human tragedy of the conflict, while also reflecting the communications component in this most multimedia of military confrontations. Many of these abrupt messages carry a surprisingly powerful emotional charge, taking museum guests back to the fraught days of summer 2014 when the survival of the country was in question.

The most powerful and innovative element of the entire museum is undoubtedly the video hall where visitors are ushered into the center of the room and immersed in total darkness before being treated to a half-hour onslaught of footage played out simultaneously on all four bare walls. The result is part documentary, part art installation. It offers a stunning and at times distressing chronology of the conflict, with a cast including Russian TV propagandists, fleeing civilians, Ukrainian soldiers, frontline journalists, and international observers. The work of Natalia Khazan and Evgeniy Titerenko, this video creation is the most significant achievement of the entire ATO Museum project. It deserves greater international exposure.

Making sense of a senseless war

Dnipro’s ATO Museum is unusual in trying to tell the story of a conflict that is still underway. War memorials and museums traditionally appear long after the guns have gone silent, but Mr. Fanygin says this is a luxury today’s generation of Ukrainians cannot afford. He argues that the very nature of Russia’s hybrid war, with its reliance of fake news and information attacks, makes it imperative for Ukraine to clarify its own narrative. “This war could continue for many years to come, but we cannot wait until it is over before we try to make sense of the events taking place,” he says. “It was vitally important for us to begin sorting things out in our own minds. We need to be clear about what we are fighting for, and where the country is going.”