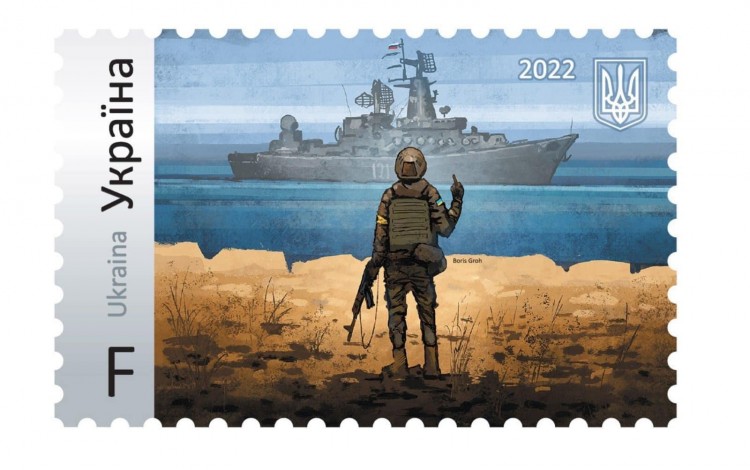 A new Ukrainian postage stamp has made international headlines in April as a symbol of the country’s courageous resistance to Putin’s invasion. The commemorative stamp depicts one of the most iconic moments of the war, which saw a hopelessly outgunned detachment of Ukrainian troops stationed on Snake Island in the Black Sea reject Russian demands to surrender with the legendary response: “Russian Warship, Go F*ck Yourself.”

This quote was immediately adopted as a slogan of the Ukrainian war effort and began appearing on billboards across the country. It also inspired officials at Ukrainian postal service UkrPoshta to launch a nationwide online competition for a commemorative stamp. This resulted in a design that can justifiably be called an instant classic.

The sinking of the Russian Black Sea Fleet flagship, the Moskva, on the day after the launch of the stamp served to generate further buzz. The Moskva was the ship involved in the now famous Snake Island confrontation and features on the stamp. It sank after being struck by two Ukrainian Neptune missiles fired from a coastal battery in an audacious attack involving the use of decoy drones.

Ukraine’s success in sinking the Moskva added an extra dimension to the hype surrounding the stamp, leading to a flurry international news reports and fuelling long queues at post offices across the country and Ukrainians waited for hours on end to get their hands on this little piece of history. Plans to expand sales online were disrupted in late April by a massive cyber-attack which UkrPoshta officials attributed to Russians infuriated by the loss of their flagship.

The Ukrainian postal service printed one million warship stamps and does not plan to produce any more. Instead, a successor stamp is now set to launch with a similar but updated design reflecting the fact that the Russian warship in question did in fact go exactly where instructed by the defenders of Snake Island.