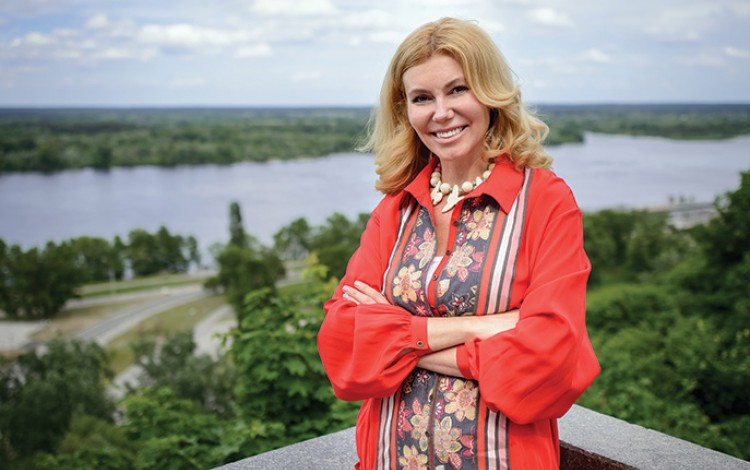 About the interviewee: Natalia Zabolotna is the CEO and founder of the Ukrainian Humanitarian Development Foundation
Peter Dickinson, Business Ukraine magazine

How can Ukraine overcome decades of misrule while healing the wounds of the Soviet past and catching up with the country’s European neighbors? In early July, a collection of international journalists, diplomats, business leaders and thinkers will join their Ukrainian colleagues in the central Ukrainian town of Kaniv in a bid to wrestle with these weighty issues at the inaugural Ukrainian ID Forum. This ambitious event is the brainchild of Natalia Zabolotna, who hopes it can grow to become a Ukrainian Davos while also providing a model for the much-needed rejuvenation of provincial Ukraine.

Zabolotna is no stranger to ambitious undertakings. A fashion conscious socialite and ultra-savvy manager, she has an impressive record of groundbreaking initiatives in the cultural sphere that stretches back almost two decades. Most famously, she is widely credited with transforming the cavernous Art Arsenal complex in central Kyiv from a derelict industrial junkyard into the country’s premier cultural venue.

Zabolotna first appeared on Ukraine’s cultural radar in the early years of the millennium when she took charge of Kyiv’s Ukraine House, which at the time was still more commonly associated with its former Soviet-era role as the Ukrainian capital’s Lenin Museum. By utilizing the considerable kudos of Ukraine’s contemporary art scene, Zabolotna was able to reshape the venue’s public profile and align it with the changes taking place elsewhere in Ukrainian society as the country hurtled towards the national awakening of the 2004 Orange Revolution.

Zabolotna’s star continued to rise in the aftermath of the revolution. She received an invitation to manage the development of the Art Arsenal complex, a flagship project personally championed by newly elected Ukrainian President and Orange Revolution hero Viktor Yushchenko as part of his bid to reshape the way Ukrainians saw themselves. Zabolotna’s task was to reinvent the sprawling former military factory space and turn it into a symbol of Ukraine’s cultural revival and national identity. She was to prove so successful in this undertaking that in 2011 Ukrainian newspaper “The Day” named Zabolotna “Person of the Year”, an unheard-of achievement for somebody active in the largely neglected cultural sphere of Ukrainian public life. Such was her status that when she finally lost her position at Art Arsenal in 2016, Zabolotna’s removal provoked a major political backlash and sparked a fierce national debate.

Since her departure from Art Arsenal, Zabolotna has headed up the Ukrainian Humanitarian Development Foundation, which is the organization behind the upcoming event in Kaniv. She sees the central Ukrainian town as in many ways the ideal place to start a conversation about Ukraine’s future. Best known as the last resting place of Ukrainian national bard Taras Shevchenko, Kaniv was a site of pilgrimage during the Soviet era that attracted upwards of 150,000 visitors every month. Schoolchildren from across Soviet Ukraine would travel to Kaniv to see the tomb of Shevchenko and traipse dutifully through the accompanying museum with its kitsch exhibits of Shevchenko memorabilia donated from across the USSR. The experience of visiting Kaniv during her own school years left a lasting impression on Zabolotna. Memories of this childhood trip have helped to convince her that the town could yet provide inspiration for the revival of Ukraine’s stagnating countryside.

Few who have visited Kaniv would question the town’s ability to impress with its natural splendor. Perched high above the majestic Dnipro River, it is a picture postcard representation of traditional agrarian Ukraine and the physical manifestation of Taras Shevchenko’s most patriotic poetry. During his lifetime, Shevchenko wrote the celebrated poem “Zapovit” (“My Testament”), in which he asked to be buried “…in my beloved Ukraine, upon a grave mound high, amid the spreading plain, so that the fields and boundless steppes, the Dnipro’s plunging shore, my eyes could see.” This description is a perfect fit for Kaniv and it is easy to see why the town became the site for Shevchenko’s tomb in the mid-nineteenth century.

Zabolotna says today’s Kaniv remains “the soul of Ukraine”, but it is a soul in desperate need of spiritual and material nourishment. Like most small towns in rural Ukraine, Kaniv is struggling with economic inertia and suffering from a host of associated social ills. Metaphors for this post-Soviet malaise abound. The town has an impressively modern river port terminal that attracts almost zero river traffic. Somewhat bizarrely, Kaniv is also home to Ukraine’s largest heliport. Both of these infrastructure white elephants are monuments to failed Yanukovych era regeneration efforts. In this sense, they serve as reminders that throwing money at the problems of small-town Ukraine will not necessarily prove effective.

Instead, Zabolotna champions a more diverse approach to the entire issue of regional revival. Above all, she believes Ukraine needs to rethink its approach to the place of culture in the community if the country as a whole is to overcome the huge transitional challenges it currently faces. “Now is the time to think about investing in the human capital of the nation,” she says. “At present, Ukraine has no strategy and the humanitarian sphere continues to suffer from chronic neglect. Over the past twenty-six years of independence, an entire generation of Ukrainians has grown up without any humanitarian opportunities except for the wealthy few. Most of this generation has not had the chance to engage in organized sports, arts or cultural activities, while at the same time beer, cigarettes and recreational drugs have become ever more freely available. We do not necessarily comprehend the extent of this degradation from our viewpoint within the privileged world of downtown Kyiv, but once you enter the suburbs of the city or travel out into the villages, the scale of the disaster soon becomes apparent.”

For inspiration, Zabolotna points to the experience of countries like Iceland, where a comprehensive youth program in recent decades was able to transform teenage delinquency rates and boost the economy. “The world is full of examples for us to learn from. The most important thing for the Ukrainian government to appreciate is that it would be much cheaper for them to invest in sports facilities and community centers than to cover the costs of future health problems and rising crime levels associated with social breakdown.” This call to invest in the next generation of Ukrainians will be one of the key messages at the Ukrainian ID Forum in Kaniv.

The mix of humanitarian and economic elements on the Ukrainian ID Forum agenda reflects Zabolotna’s conviction that the two are heavily interdependent. Besides, she notes, the last thing Ukraine needs is yet another traditional business forum. With a wry smile, Zabolotna recounts a recent conversation she had with an EU ambassador who observed that Kyiv already hosts an incredible number of investment forums without actually attracting any investment. “We need to look beyond the existing formulas if we are to make a genuine impact on Ukraine’s future,” she says. “I am convinced that there can never be a successful business environment in any country suffering from a humanitarian default. Our goal is to create an independent platform that will help us to develop an effective strategy for the development of the country. Business can only flourish when society as a whole is healthy and vibrant.”

With typically unabashed ambition, Zabolotna says she takes her inspiration from Switzerland’s Davos, which rose from relative obscurity as the venue of the annual World Economic Forum. She also points to the impact of the Guggenheim Museum on the economic and social wellbeing of Bilbao in Spain as evidence of the role high profile cultural initiatives can have on a city’s status. The Ukrainian ID Forum is only part of her vision for Kaniv, with a parallel open-air music festival dubbed “Sheva Fest” designed to attract young Ukrainians to the town while the forum is underway nearby.

Ultimately, she dreams of transforming Kaniv into a tourism focus capable of hosting millions of Ukrainian visitors each year along with members of the vast international Ukrainian diaspora. Before that can happen, she recognizes that she needs to stimulate the construction of the kind of hotel and recreational infrastructure capable of complementing the town’s ample natural charms. The result would be a small but significant economic miracle that could inspire similar change in forgotten towns and rural backwaters throughout Ukraine. “I can envisage Kaniv as a future hub for a Ukrainian Silicon Valley, or as a special economic zone,” says Zabolotna. “With enough effort, it is entirely possible to repeat the success stories of places like Davos and Bilbao in Kaniv and then replicate these results around the country. If we want to make this a reality, we must begin by first giving people a reason to travel to Kaniv. The public still associates the town almost exclusively with Shevchenko’s tomb but we should not see Kaniv as a city of the dead. Instead, it is time to bring Kaniv back to life.”