BRINGING GRASSROOTS IT INITIATIVES TOGETHER

UKRAINIAN IT ACTIVISM: NGO seeks to transform Kyiv into a genuine Smart City 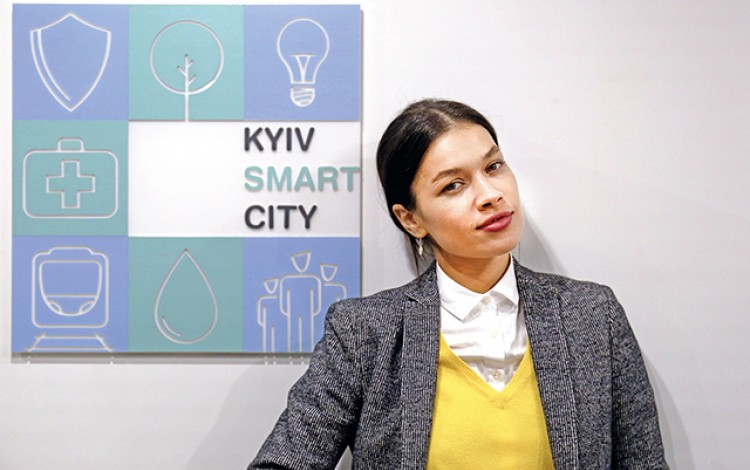 On a frosty early winter morning in downtown Kyiv, dozens of journalists have descended on Maidan Nezalezhnosti, jostling for position in a large scrum outside the entrance to the central post office building. Every TV channel is here, along with virtually all the newspapers, radio stations and a host of online platforms. Unusually for such a large media crowd, this is not a political event or a revolutionary gathering – it is the presentation of a new digital initiative to provide electronic mapping information for visually impaired Kyiv residents to help them navigate the city center. This is just one of the many projects supported and publicized by the Kyiv Smart City NGO, a civil society group that aims to serve as an umbrella organization for the many grassroots initiatives seeking to bring the Ukrainian capital into the Digital Age.

“The Ukrainian media loves IT innovation stories. They want it and they need it, but they don’t always know where to look,” Kyiv Smart City Coordinator Yaroslava Boyko tells Business Ukraine magazine as she reflects on the size of the media crowd on Maidan. We meet at the group’s loft-like open plan hub in Kyiv’s National Exhibition Center – a sprawling Soviet-era complex that is currently reinventing itself as a focus for the Ukrainian hipster generation of start-uppers and IT innovators. The Kyiv Smart City hub is a self-conscious monument to post-industrial reinvention – a split-level creative space that is all bare brickwork and heavyweight metal pillars, with one wall dedicated to the hundreds of supporters (“Smart Citizens”) whose donations help to keep the NGO afloat. There are even a couple of splendidly preserved Soviet crests adorning one upper corner of the hub. “We kept them there as a symbol of how you can successfully build on the Soviet past without necessarily destroying it,” explains Ms. Boyko.

The Kyiv Smart City NGO marked its first anniversary in December 2016. It came into being following crowd-funding efforts, and began life with an agenda to bring together a range of existing Smart City projects and local government initiatives while serving as a platform for future collaborations. The group currently works with civil society, corporate partners, and the Kyiv City Administration, with an emphasis on improving public communication of the improvements taking place at street level in the Ukrainian capital. “There is so much going on, but if nobody knows, nobody participates. Even the best ideas can die if they are not supported,” says Ms. Boyko.

So what exactly is a Smart City? According to Ms. Boyko, there is no specific answer. “Smart City is a very general term,” she says. “Every city needs to decide what the term means for them and to develop in their own individual way.” One of the current focuses of her work is a plan to create a so-called Smart Street in Kyiv’s Lukyanivska district. The current concept envisages solar-powered benches that will recharge electronic gadgets and electric cars, recycling facilities, energy-saving streetlights, improved disabled access, and CCTV coverage. The search for corporate sponsors is currently ongoing, and the goal is to use the project as a prototype for similar digital development throughout the Ukrainian capital and beyond. With plans for the envisaged 2017-2020 project taking shape, local residents are also having their say. Ms. Boyko says 75% of respondents are already prepared to recycle their household garbage, while many have backed plans to install additional energy-efficient lighting in the local park area. “We need to understand that innovation must be a partnership between the local authorities, civil society, and communities. It must meet the needs of society. Innovation for its own sake is pointless.”

The Smart City Kyiv NGO is yet another example of Ukraine’s vibrant civil society doing the things that many would regard as the responsibility of the state. In this sense, it is very much part of the post-Maidan mentality evident throughout Ukrainian society. Ms. Boyko and her colleagues actually work closely with the Kyiv City Administration and other government bodies, providing communications support and helping to attract partners and corporate financing for new projects. The group also seeks to help harness Ukraine’s huge IT potential and channel it into more commercially viable directions, conducting training courses and workshops at its Kyiv Exhibition Center hub on themes like Smart Finance. Boyko says the Euromaidan movement was instrumental in teaching her generation to take a more active role in shaping the future of the country. “We were just as smart before Maidan, but we didn’t have the same belief in ourselves or our ability to bring about change.”

Ms. Boyko admits that many of her peers have lost their enthusiasm for activism in the three years since Euromaidan. Nevertheless, she refuses to let the post-Maidan frustrations of Ukraine’s stuttering reform process distract her from the long-term objectives underpinning the Kyiv Smart City concept. “The current government do not represent the final stage of Ukraine’s transformation. I understand the sense of frustration in today’s Ukrainian society, but my goal is to unite people who want to contribute,” she says. “The future will not happen by itself. We need to build the future ourselves with the small steps we take in the present.”