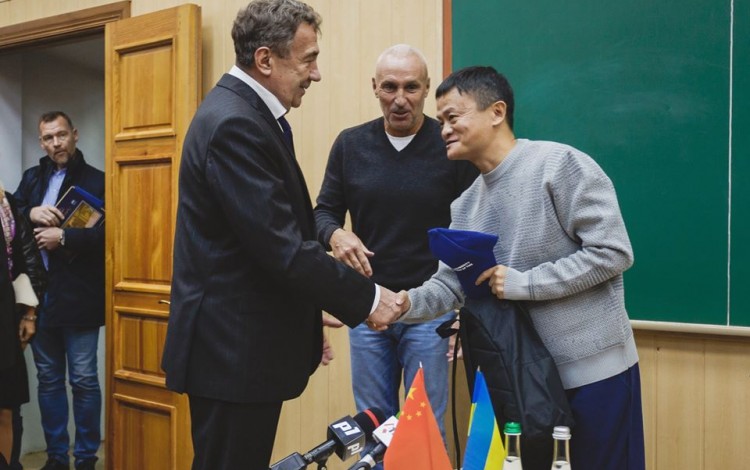 Students at Kharkiv National University have this week welcomed Chinese tech billionaire Jack Ma to the city for a motivational lecture. Ma, who is the founder of the Alibaba service and one of the world’s richest people, came to the capital of eastern Ukraine at the invitation of Ukrainian businessman Oleksandr Yaroslavsky, the president of DCH Group and a longtime supporter of Kharkiv National University, where he holds an honorary doctorate and is a member of the supervisory board.

Kharkiv was the first stop on Ma’s current visit to Ukraine, which is his first trip to the country. The Chinese entrepreneur congratulated students on the forthcoming 215th anniversary of the university and spoke at length on improvements to education and the challenges of the future.

Ma said he had no fears regarding the alleged threat posed by robots or artificial intelligence because man is fundamentally wiser. He also spoke glowingly about the leadership role of women in business, underlining that 45% of his company’s employees are women. In terms of education reform, he counselled changing approaches from kindergarten onwards, with the emphasis on creating “experts for the future, not the past”.

Ma has personal experience of harnessing the power of youth. He stressed that his own company’s rapid growth owed much to the young and motivated people he employs. This has led to the conviction that universities must seek to foster constructive, innovative and inventive thinking among undergraduates. “I don’t want people to be machines. They have to be human beings. They have to be creators,” he commented.

What is Ma’s recipe for happiness? “Money, fame, and reputation do not make me happy,” he shared. “Happiness for me is when I see that the people who work for my company are happy.” The billionaire also noted that all successful people in the world have one thing in common - they are optimists. "The most important lesson I've learned in my life is to be optimistic," he said. "I've met so many people and I've found that successful people share this positive outlook.”

Ma described his formula for success as hard work, trust in people, optimism, and a focus on tomorrow. “You have to be human. You do not have to be like a car. If you want to remember faster, know more, remember more, a machine will do it better. You have to do the things that the machine cannot do," Ma concluded.