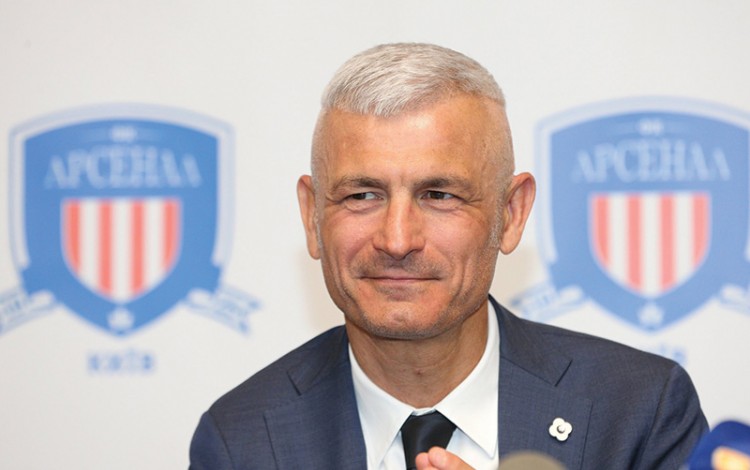 Newly promoted Ukrainian Premier League football team Arsenal Kyiv made arguably the signing of the close season when they unveiled Italian legend Fabrizio Ravanelli as the club’s new manager in late June. This is only the second managerial role of Ravanelli’s career following an underwhelming five-month stint in charge of French Ligue 1 side Ajaccio in 2013 that saw him lead the club to just one win in thirteen games before his tenure was abruptly cut short. Nevertheless, memories of the Italian’s illustrious playing career will be enough to excite Ukrainian football fans old enough to remember Ravanelli as a star striker with Juventus, Middlesbrough and Marseilles in his 1990s heyday.

Nicknamed “The White Feather” due to his distinctive grey hair, Ravanelli gained iconic status for a trademark goal celebration that involved pulling his shirt over his head and exposing his abdomen while extending both arms as he wheeled away in triumph. Much to Ravanelli’s chagrin, the widely copied celebration led to a rule change by FIFA outlawing the removal of shirts by players celebrating goals.

The most successful period of Ravanelli’s career came while he was with Italian giants Juventus, where he won the UEFA Cup in 1993 and the Champions League in 1996. Ravanelli went on to attain celebrity status in Britain following his summer 1996 transfer to English Premier League club Middlesbrough, where he quickly established himself as a fan favorite at a time when big-name foreign players were still something of a novelty in the English game.

Ravanelli’s appointment as manager of Arsenal Kyiv has a random quality about it that seems to have caught everyone by surprise. The club has a complex history of name changes and troubled former owners, having resumed operations relatively recently following a period in administration that began in 2013. Now under the direction of club co-owner and former Croatian footballer Ivica Piric, Arsenal Kyiv won promotion to the Ukrainian Premier League as the 2017-18 League 1 champions.

At his unveiling, Ravanelli freely admitted to knowing little about Ukrainian football beyond the exploits of Andriy Shevchenko and the country’s top two club sides Dynamo Kyiv and Shakhtar Donetsk. The 49-year-old Italian said he was attracted to the position due to the scale of Arsenal Kyiv’s ambitions. He signed an initial one-year contract with the club despite acknowledging his wife’s disappointment at his decision. “My wife wasn’t very happy about this, but she knows how important it is for me,” he commented.

Arsenal Kyiv are not the only obscure post-Soviet football club to unveil an unlikely twentieth century icon during the 2018 summer break. In May, Dinamo Brest of the Belarusian Premier League presented Argentine legend Diego Maradona as the club’s new Chairman. The Hand of God megastar, regarded by many as the greatest footballer of all time, has reportedly signed a three-year contract that will keep him in Belarus until 2021.