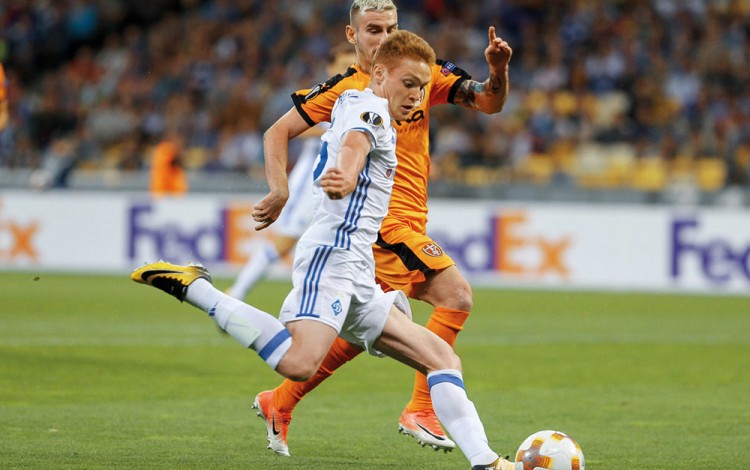 A host of top European clubs are being linked with Dynamo Kyiv midfielder Viktor Tsyhanov, with Premier League club Tottenham Hotspur reportedly preparing to make a bid for the Ukrainian starlet when the English transfer window opens in January 2019.  Spurs manager Mauricio Pochettino is said to be a big fan of the Dynamo player and is eager to add young talent to his squad after failing to make any signings during the summer 2018 window.

The Argentine trainer will likely face stiff competition from some of the leading sides in Europe. Fellow English Premier League title contenders Liverpool, Manchester United and Manchester City along with Barcelona and Bayern Munich are all reportedly following Tsyhankov’s progress closely.

The Dynamo Kyiv player has caught the eye since breaking into the first team two seasons ago. Still only twenty-one years of age, he is already one of Dynamo’s standout performers, scoring an impressive 25 goals from midfield in just over seventy games for the club.

Tsyhankov rose to prominence during the 2017-18 season when he established himself as a first team regular and netted thirteen times in twenty-seven league appearances. Impressive as they are, these statistics do not do the flame-haired attacking midfielder justice. Tsyhankov plays with a self-confident swagger that belies his youth and relative inexperience. Naturally two-footed and always eager to run at defenders, he has the skills, strength and pace to make a menace of himself against any opposition.

Tsyhankov was born in Israel where his father Vitaliy played as a professional footballer. After returning to Ukraine, he joined the Dynamo Kyiv youth setup. Many now see him as the most exciting prodigy to emerge from the Kyiv club’s academy system in a generation. He has represented Ukraine at every level from Under 16 onwards, and made his international debut against Finland in November 2016 while just eighteen years of age.

If Tsyhankov does make a move in the coming months, he will become the latest in a long line of Ukrainian stars to try their luck in Europe’s top leagues. Few have enjoyed much success. Most of the teams linked with Tsyhankov are English, but the Premier League has been particularly unkind to Ukrainian imports.

Dynamo Kyiv legend Serhiy Rebrov was the first big name Ukrainian star to ply his trade in the English top flight, signing for Tottenham Hotspur in 2000 amid much fanfare. Rebrov was very highly rated at the time, having emerged as one half of Europe’s most prolific Champions League strike partnership alongside Andriy Shevchenko in the swashbuckling Dynamo Kyiv side of the late 1990s.

The diminutive Ukrainian striker bagged a remarkable 26 Champions League goals over the course of three seasons prior to his move to North London, but he was unable to translate this into Premier League success.

Instead, Rebrov struggled to establish himself and managed just ten goals in fifty-nine league appearances for Spurs. A subsequent spell at West Ham proved even more fruitless, producing a solitary goal in his single season with the club before returning to Kyiv in 2005.

Other Ukrainian underachievers in the English top flight include Andriy Voronin, who struggled during his 2007-2010 spell at Liverpool, registering just five goals and suffering the indignity of seeing his glamor-loving wife mocked by the English tabloid press as “the world’s worst-dressed WAG”.

The biggest Ukrainian disappointment of all was national hero Andriy Shevchenko, who arrived at Chelsea for EUR 44 million in 2006 following seven imperious seasons at AC Milan but was unable to find his feet in the English game. Many pundits rate him among the most expensive flops in Premier League history.

Fellow former Dynamo striker Andriy Yarmolenko had hoped to break the hoodoo on Ukrainian attackers following his summer 2018 move to London’s West Ham United, but after exciting fans with an early brace of goals away at Everton, he sustained a serious injury and is unlikely to play again this season.

With Ukrainian strikers enjoying no luck in the Premier League, no nonsense defender Oleh Luzhny remains perhaps the country’s most successful footballing export to England. The former Dynamo Kyiv captain signed for Arsenal in 1999 and went on to make over 100 appearances for the club, winning the 2001-02 Premier League and the 2003 FA Cup. He remains a well-regarded figure among Arsenal supporters.