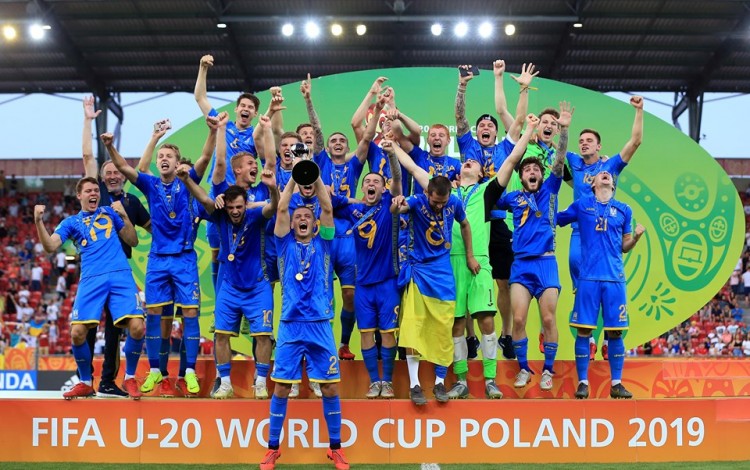 Ukraine won the FIFA U-20 World Cup in some style on 15 June, coming from behind against South Korea in the final to emerge as 3-1 winners. This thrilling victory capped a series of impressive performances throughout the tournament in Poland that saw Ukraine end the World Cup undefeated following victories over USA, Qatar, Panama, Colombia, and Italy.

This was Ukraine’s fifth appearance at the FIFA U-20 World Cup, which takes place every two years. Prior to this year’s triumph, Ukraine had never made it beyond the first knockout round of the tournament. Most of the players who secured victory in Poland play their club football in Ukraine, with Ukrainian Premier League giants Dynamo Kyiv and Shakhtar Donetsk each providing five players to the 21-man squad.

The most notable exception is 20-year-old goalkeeper Andriy Lunin, who signed for Real Madrid from Zorya Luhansk in summer 2018 in a deal worth a reported EUR 8.5 million. Although the Ukrainian shot stopper has yet to make any first team appearances for the Spanish legends, this is already looks a sound investment. Lunin was among the stars of the 2019 U-20 World Cup, making one breathtaking save in the final itself to deny the Koreans a late equalizer and earning himself the Adidas Golden Glove award as well as his U-20 World Cup winner’s medal.

Ukrainian football fans will be hoping the unprecedented success of the country’s youth team can carry over to the senior side, which has traditionally struggled to live up to its considerable potential. Although Ukraine famously provided the backbone of the great Soviet Union sides of the 1980s, the Ukrainian national football team has never reached similar heights. Ukraine’s record since 1991 includes just three appearances at major tournaments (including one as co-hosts of Euro 2012) along with five separate playoff defeats.