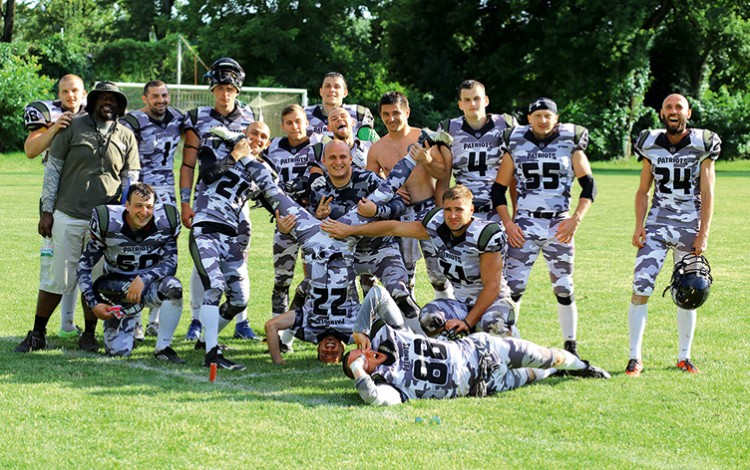 As an expat, you often need to let things go for the sake of your own sanity. This is especially true for American expats in Eastern Europe. We Americans-in-exile tend to miss the things that we have always taken for granted back home, such as high levels of service, widespread availability of consumer goods, community spirit, and perhaps most importantly, the specifically American sports that often hold those communities together.

Three years ago, a chance encounter on the streets of Kyiv led me to rediscover something I thought had been lost forever. Football, or American football as I have become accustomed to saying, came back into my life when I least expected it. This happened to me while I was walking down Kyiv’s central Khreshatyk Street. To my great surprise, I saw what appeared to be a local American football team dressed in their uniforms throwing around a football. I was immediately intrigued. The next thing I knew, I was attending a football game on the fourth of July at Kyiv’s Spartak Stadium. This old Soviet-era sports arena is an underwhelming venue nestled in one of the less exclusive districts of the city, but it has become a special place to me.

American football has been at the very center of US culture for over one hundred years. Our fathers and their fathers have all played or cheered on their favorite team. Most Americans can at least empathize with the elation and utter heartbreak that fans experience when following their team. I played American football or was around the sport for most of my life prior to becoming an expat. My father had played professionally and football was always part of our relationship until he passed away. I made it as far as university level and that proved to be the peak of my football career. It was over before I knew it, but that is the nature of the game.

The sheer scale of the passions aroused by American football in the US may be hard for outsiders to comprehend. Small towns throughout the country often shut down completely to watch high school games, while universities have multi-million dollar TV deals. The NFL itself has long since supplanted major league baseball as America’s favorite pastime.

Unsurprisingly, the American football scene in Ukraine is a long way away from the all-consuming glitz and glamor found in the US. It is a completely different story altogether, but also compelling in its own way. Somehow, the love of the game has made its way over the Atlantic and across Europe to take root in Ukraine. After my initial encounter in downtown Kyiv, I was surprised to learn that there are nearly 20 American football teams currently active in Ukraine, with seven in the capital city alone. I now coach the Kyiv Patriots, but there are also teams with names like the Bandits, Bulldogs, Jokers, and, of course, the Slavs. Players range in age from 16 to pushing 50. Some have over a decade of experience behind them, while others are only just starting out. All are welcome. It is common to encounter Ukrainians who are just beginning to learn the basics of the sport despite being older than the typical retirement age for American pro players.

To me, American football is all about sacrifice and effort. You give everything you have in order to accomplish a single goal, and you sacrifice individual glory for the greater good of the team. These Ukrainians sacrifice more than glory, because they play a sport where there is no glory on offer, at least in the traditional sense. There are no multi-million dollar contracts, no endorsement deals, no pension plans or adoring masses. The sport’s Ukrainian fan base is loyal and vocal, but they could not possibly fill out an entire stadium.

The issues do not stop there. Due to a lack of interest from the government, there are practically no fields suitable for American football in Kyiv. Those that exist are all for hire, and cost more than most teams can comfortably afford. We should also not forget that American football equipment is not cheap. So most of the players involved in Ukraine’s American football scene have to pay to play a sport that many in the country are not even aware exists.

Why do they do it? I have struggled with this question since I began coaching American football here. Why risk your body for a sport that offers you virtually nothing in return? Why spend your time and money paying to play a sport in a country where the average citizen lives off less than USD 300 per month?

Some enthusiasts clearly find the mythology of American football fascinating. For others, it is just another sport to learn. After all, this is a society where sport plays an important part in many people’s lives from an early age. Others are athletes who may not be at the top of their selected sport any longer, but are not ready to put their competitive days behind them. For quite a few, the biggest draw seems to be the comradery that the game brings.

All Walks of Life

The players I have encountered in Ukraine come from a wide range of professional backgrounds. My hard-hitting middle linebacker is an accountant. My center works in IT security, while my left tackle is a lawyer. My craziest player is a cornerback who simply loves to hit. When he is not deflecting passes or delivering blows, he is an engineer for a Ukrainian airline. They come from all over as well. I coach the Kyiv Patriots and we have players from Kyiv, Kharkiv, Dnipro, Donetsk, Crimea and numerous other locations throughout the country that I could not even pronounce, let alone spell.

American football is just about as Western a sport as one could play in Eastern Europe. At first, I thought many played just because it was cool. There are many great photographers in Kyiv and my players never waste an opportunity to jump in front of the camera. They look like warriors and the cheerleaders all look like catwalk models. Sometimes it can be quite a spectacle. Over time, however, I learned that the sport means more to them then meets the eye.

Ukrainians have learned to live with political turmoil, corruption, and the instability of successive revolutions. While the system seems to be slowly moving towards reform, the average Ukrainian often struggles to identify any tangible signs of progress. Instead, political clans constantly fight to hold onto influence, power, and the corrupt system that gave them their wealth and status. Life is hard and can seem intrinsically unfair. It is not difficult to see why many Ukrainians feel they are at the mercy of the authorities.

Football, on the other hand, is much closer to a genuine meritocracy. If you work hard, respect yourself and your teammates, you will receive rewards for your efforts. In a country that has suffered more than most from political divisions, American football also offers a sense of coherent identity. Players is no longer from Kyiv or Donetsk, Lugansk or Lviv. They are Patriots, Bulldogs, Lions, Pirates, or Rockets. Most importantly, they are family.

I sometimes feel like I have travelled the world in search of the American dream only to find it in Ukraine’s American football scene. Every weekend on small and poorly managed fields, with little to no training equipment, I see the essence of the American dream take shape. Hard times are nothing new for these players. I have watched students struggling to find their place and guys that have to choose between paying for practice or eating. I have encountered players battling against things like gambling addiction. Along the way, there have been many success stories. These Ukrainian players represent the game in all its glory and play it the way they live: with grit, sweat and love. It has been an honor to be a part of it.

There are challenges. Language barriers remain, but I have learned how to use profanity quite efficiently thanks to my players. Inevitably, there are funding issues. Finding sponsors can be difficult. On top of everything else, the game itself is hard enough to teach and play. However, I have no doubts that it has all been worth it. When my father passed away, I never thought that I would be so close to the game again. The players I have encountered in Ukraine, along with their dedication and their passion, is what brings me closer to him. It has brought me closer to the community I live in, and in some ways, it has also brought me closer to America.

About the author: Alfonsine Williams is a Kyiv-based American expat. He is head coach of the Ukrainian National American Football Team and the Kyiv Patriots, and director of business development at Ukraine-based IT firm Mobilunity