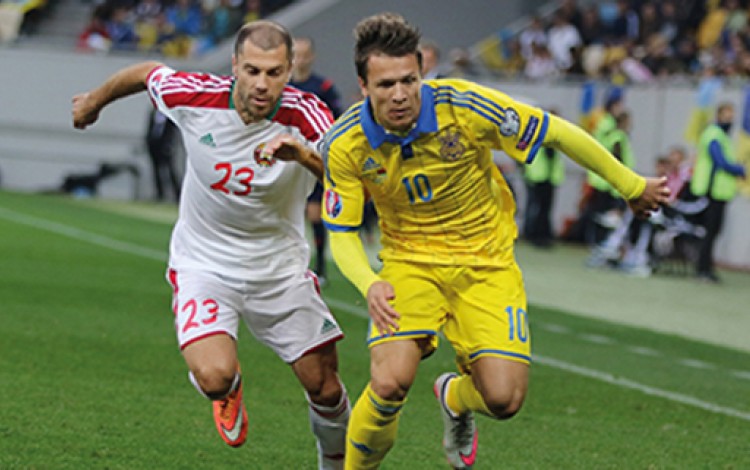 The Ukrainian national football team goes into the find round of Euro 2016 qualification matches in early October lying in third place in their group and in line to enter the playoff stage. There remains an outside chance that Ukraine could qualify automatically, either by sneaking second spot in the group or by virtue of being the strongest third-placed team throughout the qualifying stages. However, with an awkward away tie in Macedonia and a tricky home match against Spain ahead of them, few would fancy Ukraine’s chances of improving on the team’s current qualifying group position.

A third place finish would secure Ukraine a place in the Euro 2016 playoffs and a chance to banish what is one of international football’s most unwelcome records. Despite inheriting what was by far the strongest football tradition in the former Soviet Union, independent Ukraine has only ever qualified for one major international tournament - the 2006 World Cup in Germany, where the team reached the quarterfinal stage of the competition before losing out to eventual winners Italy. This lack of tournament qualification reflects Ukraine’s reputation as the nearly men of international football.

Since entering international competition in the mid-1990s, the Ukrainian national team has fallen at the qualification playoff hurdle of major competitions on a record five occasions. This sequence of playoff woes began in 1997, when Ukraine lost out to fellow international football newcomers Croatia in the race for a place at the 1998 World Cup in France. There was similar heartbreak in 1999 and 2001, with Ukraine defeated at the playoff stage for Euro 2000 and the 2002 World Cup by Slovenia and Germany respectively. In more recent times, Ukraine failed to reach the 2010 World Cup following playoff defeat to Greece, and subsequently missed the 2014 World Cup after becoming the first team ever to surrender a two-goal first leg playoff advantage in a 2-3 aggregate loss to France. No other national side has fallen at the playoff stage with such dismal consistency.

Ukraine’s playoff woes have made the team something of an international enigma. Despite possessing a wealth of top quality players, a strong domestic league, and a long history of footballing excellence, Ukraine has yet to make its mark on the world scene. The current crop of players, led by head coach Mykhailo Fomenko, will now be hoping to break their playoff hoodoo and reach Euro 2016 in France. Much will depend on the form of star player Yevhen Konoplyanka, who was recently signed by Spanish giants Seville after impressing during Dnipro Dnipropetrovsk’s sparkling 2013-14 Europa League campaign. Konoplyanka’s electric wing play has already proved a big hit in the Spanish league, and he is likely to come in for special attention when Ukraine line up against Spain in Kyiv in October. If, as currently looks likely, Ukraine do end up securing a playoff berth, then the decisive ties will take place in mid-November.