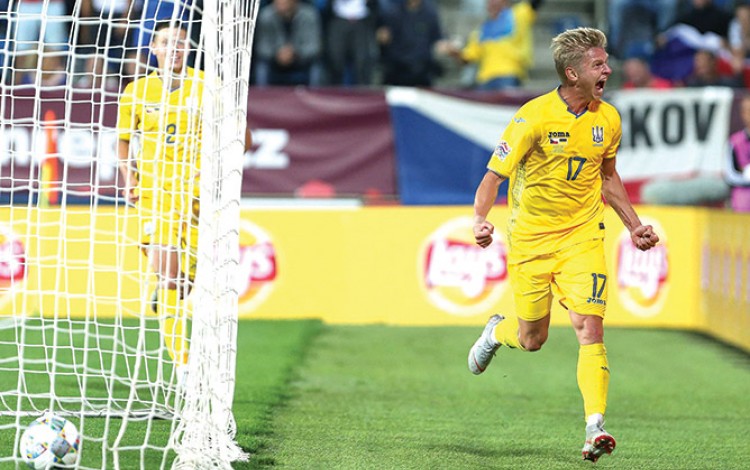 Ukraine will face the Czech Republic in Kharkiv in 16 October with Andriy Shevchenko’s side looking to build on a promising start to UEFA’s new Nations League competition. Ukraine go into the match with a perfect Nations League record of two wins from two games, having recorded early September victories in the Czech Republic and against Slovakia in Lviv. A further win in eastern Ukraine would leave Shevchenko’s team virtually assured of top place in their League B group and on track for promotion to the heady heights of League A. More importantly, it would also open up a potential back door to qualification for Euro 2020.

Most football fans remain unconvinced by the UEFA Nations League. It is the first new international competition to appear on the football scene for many decades, lending it an inevitable air of intrigue. However, a complex and opaque format has left many observers scratching their heads. The immediate objective is clear enough – to replace meaningless international friendlies with a competition capable of filling the gaps every two years between World Cups and European Championships. Nevertheless, the structure of the Nations League has proven somewhat impenetrable, with a total of 55 European national teams split into four leagues and each league divided into a further four groups. The result is a multi-divisional structure that will allow for relegation and promotion at the end of each biannual Nations League season. Ukraine are currently in League B, but if they finish top of their group this autumn as expected, they will be promoted to League A for the next Nations League season in autumn 2020.

Promotion would allow Ukraine to rub shoulders with the elite of European football. Winning their group would also earn Ukraine the right to a playoff spot for Euro 2020. This back door route to UEFA’s premier competition is the primary reason why national sides like Ukraine are liable to take the Nations League seriously. Despite boasting one of the top ten domestic leagues in Europe and being home to some of the finest players and most renowned clubs in Eastern Europe, Ukraine has a miserable record of qualification for major international tournaments. The Ukrainian national side has fallen at the playoff stage on five separate occasions and has only managed to qualify for three finals since the country first gained independence in 1991, with one of these qualifications coming via Ukraine’s host nation status at Euro 2012. If Ukraine fails to secure qualification to Euro 2020 via the traditional route, first place in their Nations League group will secure the national side another opportunity to book a place in the finals.

Ukraine began the country’s inaugural Nations League campaign in some style. The team came from behind in the Czech Republic to grab victory via a last minute goal from Ukraine’s Manchester City midfielder Oleksandr Zinchenko, who capitalized on confusion between the Czech goalkeeper and a defender to net the winner. Zinchenko’s strike followed on from an equalizer on the stroke of halftime by Ukraine’s flying winger Yevhen Konoplyanka, who plays his club football for Schalke in the German Bundesliga. Ukraine will be counting on further heroics from this pair in Kharkiv, but expectations will be even higher for national team star Andriy Yermolenko, who recently opened his account in the English Premier League with an impressive brace of goals for new club West Ham United against Everton at Goodison Park in Liverpool.

Yermolenko went through an indifferent patch last year following his big money transfer from Dynamo Kyiv to Borussia Dortmund. The previously swashbuckling Ukrainian striker often appeared strangely subdued in the German Bundesliga, managing just three goals all season before departing via a summer transfer to London. His encouraging start to the new campaign with West Ham United will raise expectations among Ukraine fans and encourage speculation that the national team’s talisman is once again returning to the top of his game. With 36 goals in 78 internationals, Yermolenko is the country’s second highest all-time top goal scorer behind current team coach Andriy Shevchenko. He scored the winner from the penalty spot against Slovakia in Lviv on 9 September to secure Ukraine’s second successive Nations League victory. Many will be hoping he can now help Ukraine complete a double over the Czech Republic and increase the country’s chances of making it to Euro 2020.