Ukrainian national team coach Andriy Shevchenko has silenced his critics by leading Ukraine to next summer’s European championships in style and ending the calendar year unbeaten for the first time in the country’s footballing history. Can the former Milan and Dynamo Kyiv superstar now make his mark at Euro 2020 and prove he has what it takes to succeed as a manager at the highest level? 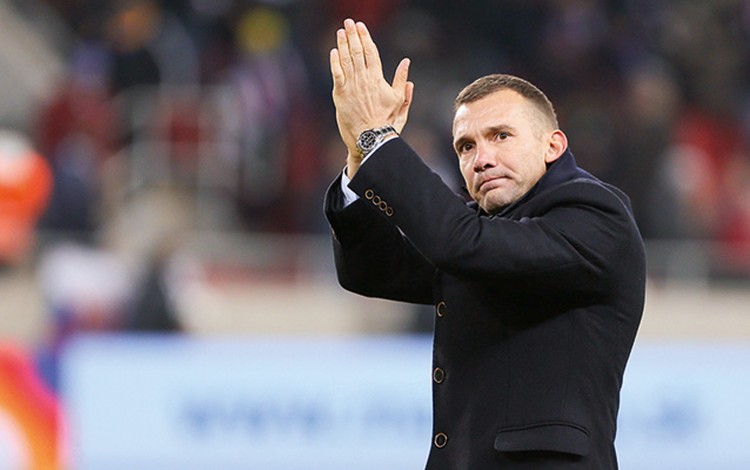 Ukraine’s national football team ended 2019 on a high note, rounding off the year unbeaten and well-positioned as one of Europe’s most fancied teams ahead of the Euro 2020 championship next summer. This is only the third time Ukraine has made it to the finals of the European Championship, and the country’s football fans are having a hard time remembering when they last felt so optimistic about their side’s chances. Much of this feel-good factor is down to the swashbuckling and self-confident brand of football promoted by Ukrainian head coach Andriy Shevchenko, who is beginning to build a managerial reputation to match his glittering career on the pitch as a star striker for Dynamo Kyiv, Milan, Chelsea and Ukraine.

The current wave of optimism around the Ukrainian national team is a far cry from the sombre mood that shrouded the side when Andriy Shevchenko first took on the manager’s role three-and-a-half years ago in summer 2016. At the time, news of Shevchenko’s appointment as successor to the underachieving and uncharismatic Mykhailo Fomenko was met with a considerable amount of scepticism. Despite being a national team legend and his country’s all-time record goal scorer, Shevchenko was a complete managerial novice with no experience at club level and only a brief six-month spell as Fomenko’s assistant on his CV. Critics saw it as yet another uninspiring in-house appointment of the kind that had left the country’s formerly all-conquering club side Dynamo Kyiv mired in mediocrity.

Shevchenko started slowly and failed to qualify for the 2018 World Cup in Russia. However, by the time qualification for Euro 2020 began, the former national team captain had grown into his managerial role. Over the past two calendar years, Shevchenko’s side have lost just one match while topping their Euro 2020 qualification group and winning their inaugural Nations League group. This run of success has included a string of standout performances such as the 5-0 drubbing of Serbia in summer 2019 and the autumn victory over European champions Portugal that secured Ukraine’s place in next year’s European Championship finals.

Shevchenko cannot be given all the credit for the remarkable revival in the Ukrainian national team’s fortunes. The impressive coaching setup operating behind him has also played a significant role in the Ukrainian squad’s recent development. Italians Mauro Tassotti and Andrea Maldera, Spaniard Pedro Luis Jaro, and Ukraine’s very own Oleksandr Shovkovsky have all made important contributions to the training and preparation that have enabled the side to flourish in a dynamic and open environment.

Perhaps inevitably, Shevchenko’s success as Ukrainian national team manager and his global name recognition have combined to make him a potential candidate for numerous top jobs in club football. Autumn 2019 saw a flurry of speculation suggesting that the Ukrainian may be on the verge of a return to his beloved Milan. Those rumours eventually proved to be unfounded, but if Shevchenko succeeds in leading his side to the latter stages of Euro 2020 next summer, there is every chance this will translate into opportunities to manage in Europe’s top leagues. For now, though, Shevchenko remains focused on the task of building on the good form of the past few years and leading Ukraine to new heights at the European Championship.

Euro 2020 will be a unique UEFA tournament, with games taking place in 12 different countries as part of one-off efforts to celebrate the sixtieth anniversary of the European Championship. Ukraine have been drawn in Group C alongside the Netherlands and Austria, with the final spot in the group set to be confirmed following early 2020 playoff ties. With the Netherlands among the 12 “host” nations at Euro 2020, Ukraine will begin their campaign with a tricky encounter against the Dutch in Amsterdam on 14 June. The Ukrainian bandwagon will then depart for Romanian capital Bucharest, where Shevchenko’s side will play Austria and an as-yet undetermined third group stage opponent.

Neither of their confirmed Euro 2020 group stage rivals should leave Ukraine feeling overly intimidated. Ronald Koeman’s Netherlands side look to be on their way up after a number of years in the footballing wilderness. They have some big names in their side including this year’s Ballon D’Or runner up Virgil Van Dijk. With the domestic advantage in their favour, the Dutch certainly represent the toughest group stage challenge for Shevchenko’s side. Nevertheless, Ukraine’s victory over reigning Euro champs Portugal in autumn 2019 demonstrated the team’s ability to compete against European footballing aristocracy.

Central European outfit Austria look beatable. Boasting the likes of ex-Dynamo Kyiv defender Aleksandr Dragovic, David Alaba of Bayern Munich, and former West Ham player Marko Arnautovic, the Austrians have a sprinkling of quality in some areas of the pitch. However, they have shown during the recent qualifying campaign that whilst they can dismiss weaker sides, they struggle against any kind of quality opposition.

Ukraine’s final opponent in the Euro 2020 group stages will be either Romania or any one of Belarus, Georgia, North Macedonia and Kosovo. None of these sides represents particularly dangerous opposition, although with the tie set to take place in Bucharest, Ukraine would probably be better off avoiding Romania and the added headache of facing another opponent on their home turf.

When pressed in late 2019 as to whether he had a fairly strong indication of the squad he will be taking to next year’s tournament, Shevchenko remained coy, saying, “There is still a long way to go and a lot can happen between now and then.” However, despite this quote from the head coach, it would be rather uncharacteristic of him and his backroom staff to draft in a large amount of surprise selections or instigate a complete squad overhaul before June 2020.

Ukraine’s Under 20 World Cup winner Denys Popov could be one of the few wildcard selections if he continues to flourish at Dynamo Kyiv following the Ukrainian Premier League winter break. Another name to keep an eye on is attacking midfielder Bohdan Lednev. The Zorya Luhansk star will be aiming to force his way in as a late entry to Shevchenko’s squad.

Given the recent performances of the national team, the current squad does not look to have any obvious weaknesses. Ukraine ended the calendar year unbeaten for the first time ever, with a record of seven wins and three draws. The aforementioned victories over Portugal and Serbia were obvious highpoints, but fans were also impressed by the professionalism instilled by Shevchenko and his hybrid Ukrainian, Italian and Spanish backroom team throughout the Euro 2020 qualification campaign.

The spirit of the squad was on display during the final game of the qualification series in Serbia. With Ukraine already assured of a place at Euro 2020, they could have been forgiven for relaxing. Instead, the team fought back from 1-2 down to grab a last gasp equaliser in Belgrade and keep their unbeaten record intact. This “never say die” attitude has become one of the hallmarks of Shevchenko’s national side, and it is something that delights the team’s supporters. The team’s fighting spirit on the pitch reflects what appears to be a strong sense of camaraderie running through the squad, with strength in depth in all positions but no single star player hogging the heroic headlines, despite the presence of numerous household names.

Ukraine’s first choice midfield trio has been indispensable over the past 18 months. Taras Stepanenko plays at the base of this central triangle. He is the player who labors along as the team’s unsung hero, with his impact typically not being truly noticed until he is absent. It is absolutely vital Stepanenko remains fit for next summer, with many in the media calling him the squad’s most indispensable player. Ruslan Malinovksyi and Oleksandr Zinchenko have also come into their own this year. The latter broke into the first team of a domestic treble-winning Manchester City side despite being deployed as an unorthodox left back. Manchester City coach Pep Guardiola’s genius has helped Zinchenko develop into a more complete and rounded midfielder by adding greater defensive awareness to his game. His defensive abilities have improved tenfold this year, as has his maturity on the field. Many see him as a future national team captain.

Special mentions need to be given to Roman Yaremchuk and Andriy Pyatov. Yaremchuk looks to have finally found his feet at international level as the long-awaited goal scoring heir to Andriy Shevchenko. He is still a work in progress, but Yaremchuk could well prove to be the piece of the puzzle Ukraine have struggled to replace ever since the current manager retired. At the other end of the pitch, goalkeeper Andriy Pyatov had the year of his life in 2019 for the national team. Whilst his performances for Shakhtar have raised eyebrows on occasion, his displays for Ukraine have been immaculate. This included a few key saves in home and away ties against Portugal, and an overall record of just four goals conceded in eight qualification matches. If Pyatov can continue this form into Euro 2020, he may well end up being recognized as Ukraine’s greatest ever keeper.