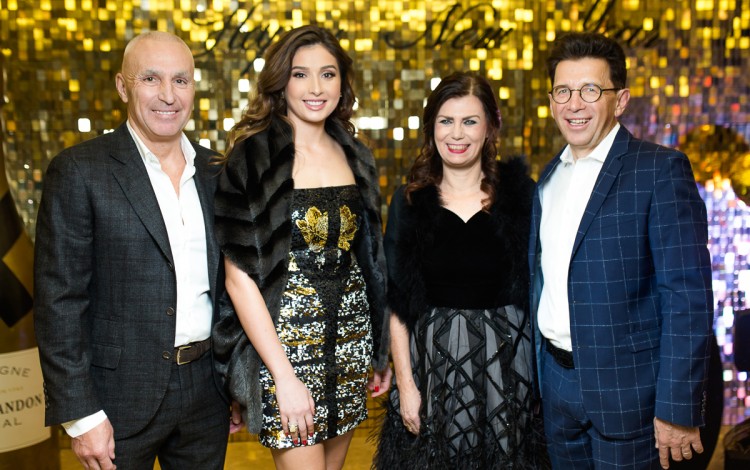 Oleksandr Yaroslavsky welcomed in the New Year at his five-star Premier Palace Hotel Kharkiv along with special guests UEFA Events SA CEO Martin Kallen and wife Lizalot. Oleksandr and Marina Yaroslavsky became friends with the Kallens as Kharkiv prepared to host the UEFA European Championship in 2012, with Yaroslavsky playing a key role in the former Ukrainian capital’s preparations by financing the necessary infrastructure upgrades. One of the most important additions to the Kharkiv ensemble ahead of Euro 2012 was the Premier Palace Hotel itself, making it a particularly fitting venue for some New Year reminiscences.

“I have a lot of memories about the construction of the Premier Palace Hotel Kharkiv,” shared Martin Kallen. “To be honest, I did not initially believe that it would be possible, but it happened in a very short timeframe. Oleksandr is the only person who could have achieved this. It is my pleasure to be here once again with my friends on the latest of many enjoyable trips to Kharkiv.”

“I really like Kharkiv,” added Lizalot Kallen. “The hotel is beautiful with great attention to detail. Clearly someone with good taste was behind the design and construction process.”

Oleksandr Yaroslavsky marked the New Year festivities by reflecting back on Kharkiv’s Euro 2012 preparations and wishing fellow residents more such opportunities. “Today the hotel is one of the pearls of the Ukrainian hospitality sector but I can remember when the site was a wasteland. I came here with Martin and told him what we would create. Frankly speaking, I do not think anyone really believed us, but we created this wonderful hotel. I would like to thank Martin once more for giving Kharkiv the opportunity to host Euro 2012, and I would also like to make a New Year wish on behalf of my fellow Kharkiv residents and guests that we will have the chance to celebrate one more Euro championship in our beloved city!”

Premier Palace Hotel Kharkiv was unveiled on the eve of Ukraine’s role as co-hosts of UEFA’s Euro 2012 European Championship, where it served the regional UEFA headquarters. The hotel construction took place in record time and was part of Yaroslavsky’s overall Euro 2012 investment of approximately USD 300 million. In addition to the city’s first five-star hotel, this included a complete overhaul of Kharkiv International Airport and an upgrade of Metalist Arena football stadium.