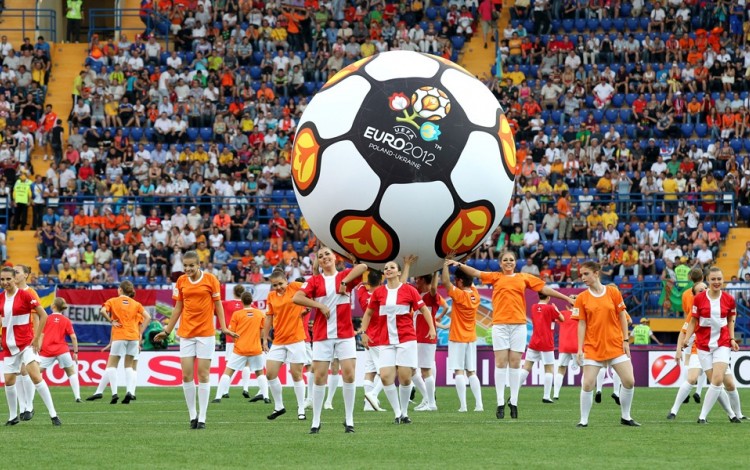 Courtesy image: the pre-match show gets underway at the Metalist Arena on 9 June 2012 prior to Kharkiv’s first Euro 2012 tie between Denmark and the Netherlands
Business Ukraine magazine

The largest private investor behind Ukraine’s Euro 2012 upgrade has unveiled plans to open a museum dedicated the impact of the tournament on his home city. Oleksandr Yaroslavsky invested an estimated USD 300 million to prepare Kharkiv for its role as one of four Ukrainian host cities during the summer 2012 UEFA football championship. Yaroslavsky’s DCH Group is now working on a new museum project in Kharkiv that aims to highlight the city’s Euro 2012 experience.

Kharkiv’s coming Euro 2012 museum has a budget of USD 1.5 million. It will feature exhibits from the tournament ranging from photography and video materials to memorabilia sourced from both fans and players. Meanwhile, interactive elements promise to offer visitors the opportunity to experience the carnival atmosphere of the tournament for themselves.

“The idea for a Euro 2012 museum first arose as we reminisced about the many Kharkiv projects associated with the championship and came to the conclusion that Euro 2012 had changed the fate of the city,” commented Yaroslavsky. “UEFA’s decision to select Kharkiv for this world class sports event created new opportunities and initiated a transformation of the city that continues to this day. The new airport has broadened Kharkiv’s global horizons, while the redeveloped stadium complex came complete with urban landscape development that gave people a sense of pride and the inspiration to be creative themselves. It is not too common to look at sports events in terms of the impact they have on host cities and local residents, but it is obvious that the impact of Euro 2012 on Kharkiv was major. This is why we are convinced it is appropriate to establish a museum dedicated to the event.”

Key elements of these infrastructure improvements included the complete redevelopment of Kharkiv International Airport, the reconstruction of the city’s Metalist Arena stadium complex, and the construction of the Premier Palace Hotel Kharkiv, the city’s first five-star hotel, which served as the regional UEFA headquarters during Euro 2012.

UEFA officials have backed the concept of the museum. “Kharkiv was a unique host city for UEFA in that there was a single partner (DCH Group) managing so many major infrastructure projects,” offered UEFA Events CEO Martin Kallen, who worked closely with Yaroslavsky and his team during preparations for Euro 2012. “The idea is a museum focusing on the impact of Euro 2012 on Kharkiv is very interesting and appropriate. We hope that the national football associations of the teams that played group stage games in Kharkiv (Denmark, Germany, Portugal and the Netherlands) will contribute to this initiative by providing exhibits from their time in the city.”

The USD 1.5 million museum is set to open on 5 December 2019, exactly ten years after the grand opening of the redeveloped Metalist Arena, which served as the start of the city’s Euro 2012 upgrade.