Yaroslavsky to Olymp Kharkiv championship team: you can rely on my support 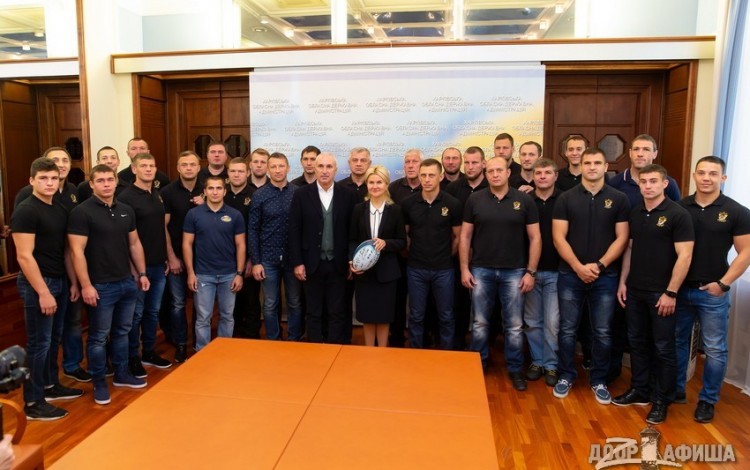 DCH Group owner and Kharkiv Olymp Rugby Club president Oleksandr Yaroslavsky toasted the team’s success on 13 November during a reception with Kharkiv Oblast Governor Yulia Svitlychna to celebrate Kharkiv Olymp’s latest Ukrainian league title victory and the recent victories of the Ukrainian national rugby team. There was good reason to celebrate following the national team’s 10 November 48-24 triumph over Hungary, which was largely due to the performance of the many Kharkiv players in Ukraine’s national side.

“I am very proud to see Kharkiv players representing Ukraine not only here at home but also abroad,” commented Yaroslavsky. “I know the huge responsibility that the head coach carries before the club, his players, the Kharkiv region, and the nation. I want to congratulate you and assure you that I will continue to provide my support. I wish you many more victories!’

During the reception, players received a number of souvenir gifts including branded rugby balls in the club colors of Kharkiv Olymp. Governor Svitlychna also offered her congratulations on the team’s fourteenth Ukrainian national championship. “I hope you will maintain your fighting spirit and secure many more victories. Thank you for bringing success and sporting glory to Kharkiv region. Our fans follow your achievements and offer their full support,” the Governor commented.